From the book Imagine John Yoko

The Elements Mix of ‘Imagine’ is a brand new mix, featuring solely the string parts arranged by John Lennon and orchestrated by Torrie Zito that were recorded at The Record Plant on 4 July 1971 by ‘The Flux Fiddlers’, 27 of the finest New York classical session musicians. On the BluRay audio disc in the Box Set, The Elements Mixes are available in high definition 24-96 Stereo and exclusively in stunning 5.1 Surround Sound.
From Imagine – The Ultimate Collection

John: My album front and back is taken by Yoko as a Polaroid. It’s a new one called a Polaroid close-up. It’s fantastic. She took a photo of me, and then we had this painting off a guy called Geoff Hendricks who only paints sky. And I was standing in front of it, in the hotel room and she superimposed the picture of it on me after, so I was in the cloud with my head. And then I lay down on the window sill to get a lying down picture for the back side, which she wanted with the cloud above my head. And I’m sort of ‘imagining’.

24 June 1971 was our tenth wedding anniversary and because by then Bici and I had both realized we were gay and in very different relations, we organized a Flux Divorce event. The house got divided in all kinds of funny ways. It was a great event. Many of our Fluxus friends attended and to the delight of the neighbours, John & Yoko arrived in their limousine. They had a card that they gave us – Yoko signed her half to Bici and John signed his half to me.

The next day, somebody from their office called up and said that they would like to purchase a Cloud Painting I had created in 1966 – the one they had seen in the dining room. So we agreed on a price, and they came and picked it up, and I signed the back ‘For John & Yoko with love Geoff, 25 June 1971’. I had no idea my painting would end up being used as part of the Imagine album cover.

I love painting skies and have been painting them since the mid-Sixties. I had a sky bundle in a show in the Bianchini Gallery in ’65, sky on sky on sky, all tied together with rope and pages with overlapping skies. That whole show was all sky. There was a stretch when I was doing acrylics of sky over and beyond those sky bundles and I’ve painted a lot of watercolours of sky over the years.

I just had a show in Blois in France – a wall of 113 watercolours of skies, all about 11×18 inches in size, interspersed with roof slates, along with a couple of environments and some letter pieces and stair pieces.

When John & Yoko were working with Allen Klein at ABKCO, they wanted me to paint a Sky Ceiling for their conference room, but unfortunately the project never got realized in time. There are some good memories from all of that time.

Fluxus is the latin for Flux. And it’s about change, it’s about purging, so that you have Flux as abnormal discharge but it’s also like welding and bringing two different pieces of metal together. And I think all of these qualities are part of what are incorporated into the idea of Fluxus as a group of artists working together. It’s wanting to break with tradition, be revolutionary, working as a group, challenging traditional ideas and breaking open one’s thinking so that you move into a different realm of perception and ideas.

Jonas Mekas: In 1957, I was editing Film Culture magazine and I needed somebody to help me with the design. George Maciunas was a student and it was the beginning of a very long friendship. Sometimes he designed just a little bit to help me out; he also designed a number of issues totally – from beginning to end.

Yoko: By 1961, the concerts that I was hosting at my Chambers Street loft were getting very popular. First it had only been ten people coming, but soon there were hundreds, including John Cage, David Tudor, Peggy Guggenheim, Marcel Duchamp, Max Ernst, George Brecht, George Segal, Richard Maxfield, Beate Gordon, Robert Rauschenberg, Jasper Johns, Isamu Noguchi, and La Monte Young. And a young George Maciunas, although I didn’t know it at the time.

Later that summer, George opened the AG Gallery on Madison Avenue in midtown, hosting exactly the same kind of events as I had been doing in my Chambers Street loft. All the artists from my Chambers Street Series then started lining up in front of his gallery. George had seen one of my accordion-shaped calligraphy books at Richard Maxfield’s house and offered me the last show at his gallery. This was my first show of Instruction Paintings. The instructions gave me the freedom to do all sorts of things that you can’t do in the material world, for instance, to ‘mix three paintings in your head’.

George said we had to have a name for this movement that was happening. ‘You think of the name,’ he told me. I said, ‘I don’t think this is a movement. I think it’s wrong to make it into a movement.’ To me, ‘movement’ had a dirty sound – like we were going to be some kind of an establishment. I didn’t like that. So I didn’t think of any name. The next day, George said ‘Yoko, look.’ He showed me the word ‘Fluxus’ in a huge dictionary. It had many meanings, but he pointed to ‘flushing’. ‘Like toilet flushing!’, he said laughing, thinking it was a good name for the movement. ‘This is the name,’ he said. I just shrugged my shoulders in my mind.

Jon Hendricks: In a way, George Maciunas was the Marinetti or the André Breton of the Fluxus movement. He knitted it together, shaped the earliest concerts, wrote the manifestos, and oversaw the publications and editions, through his editing, design, production and advertising. But it would be a mistake to think of Fluxus as a one-man show. Fluxus artists recognized Maciunas’s role but remained fiercely independent, at times embracing the ideals of the movement and at other times going their own way. Ultimately, Maciunas’ vision of a collective ‘united front’ proved impossible to realize except within his production of Fluxus anthologies, editions and occasionally in Fluxfests and environments.

Jonas Mekas: In 1966, I was running film screenings and needed a place. George created the first artist cooperative at 80 Wooster Street in SoHo and we did a lot of work together. I bought in. I took the first floor and basement and gave the basement to George for him to live and work in because he was so poor. George was laughing at it all, and creating in its place his own fragile life, a totally inconsequential unimportant world, a world of games, little boxes, puzzles, jokes, all in praise of nothingness. His art had no value at the time, and he gave so many of his works away, or sold them for just enough to survive. He lived very economically. He worked day and night. He was an insomniac. He was the one who made SoHo. He created the first twenty-five or so cooperative buildings. He risked jail, he was badly beaten up.

Stills from Jonas Mekas’s home movie of George Maciunas’s dumpling party
From the book Imagine John Yoko
In the summer of 1971, George held that famous dumpling party with very badly cooked dumplings! John had just acquired a Polaroid camera that day, I think, and he wanted to test it. He brought it with him and he took snaps. He gave them away to some of the people who were there but seven of them he gave to me because they involved George and me. Andy Warhol was also there. He respected George very much and although George critiqued what Andy was doing, we were all friendly and got along very well.

John: He has pancake parties in his bomb shelter which has a nice little stone garden at the back, and that was filmed too. I took a great picture of Yoko, double exposed with a Polaroid camera, close up, and that’s going to be her LP cover.

Yoko: From June to October 1971, George constructed many pieces for my Everson Museum show. In general, if I said I wanted to do something, he would immediately say, ‘Okay let’s do it.’ He was someone who materialized things for me. He was good at that. But he did it in his own way and I sometimes had to say that I didn’t want it like that. And this happened at the Everson Museum. 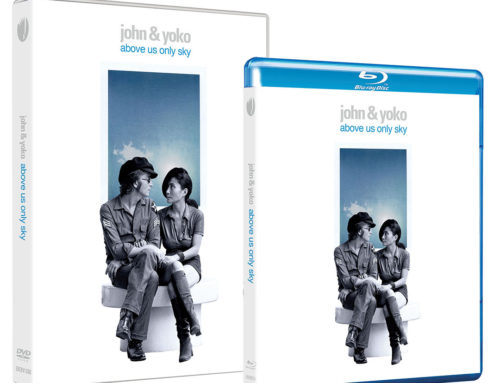 Above Us Only Sky – Released on DVD, Blu-ray & Digital on 13th September 2019 Gallery 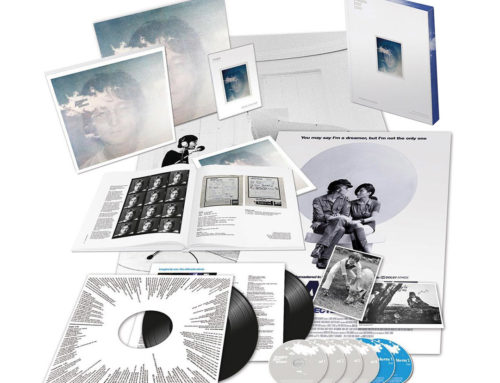 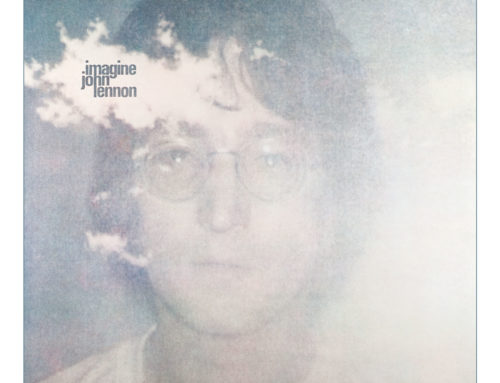 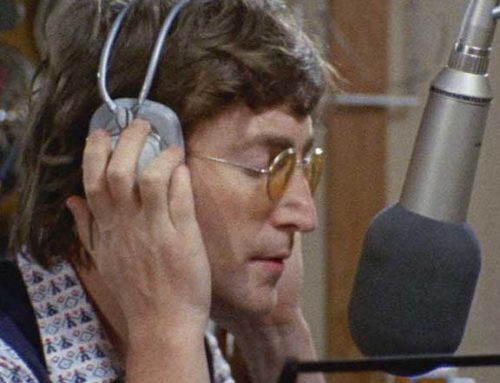 Behind The Music: Jealous Guy Gallery

Behind The Music: Jealous Guy